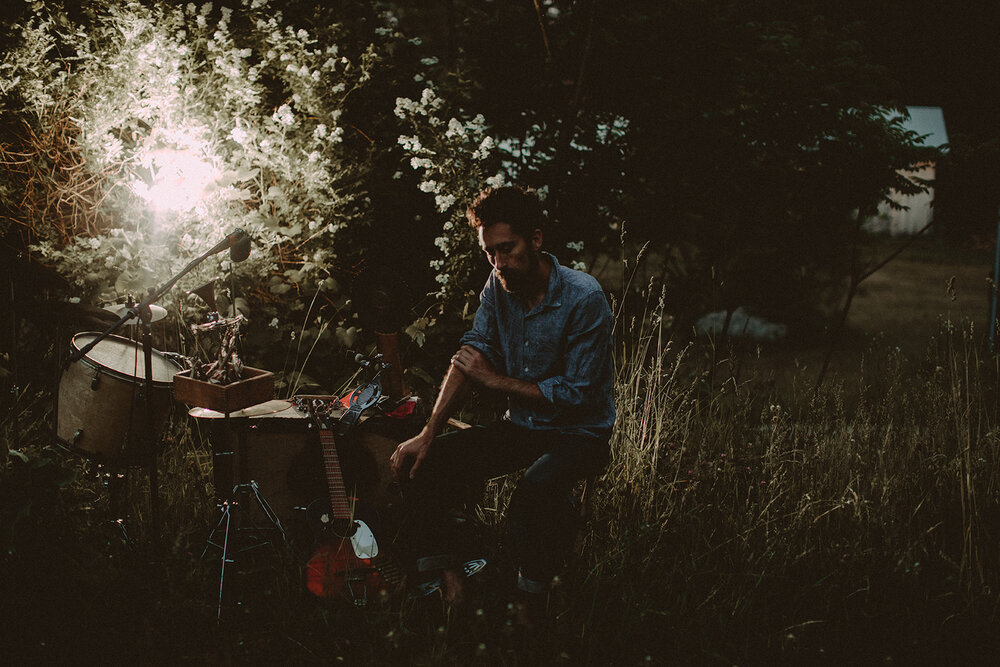 Matt Lorenz's vision, manifest in The Suitcase Junket, developed in the tension between the grand and the solitary. Grand in its imagery, sound, and staging. Solitary in its thrift and self-reliance. What instruments he requires, Lorenz builds from scratch and salvage. What parts five players would perform, he performs alone. The spectacle of his one-man set bears constant comparison to legends of showmanship, brilliance, madness, and invention.

While audiences are captivated by his solitary form and the show itself, Lorenz, who homesteads with rescue dogs and chickens in rural Western Massachusetts, is most serious about the songs. He has been building a catalog, writing a world into existence. Solitary on stage and on the road, his mind is crowded with characters, narratives, voices, imagery, sounds as wide and varied as mountain throat singers and roadhouse juke boxes, plus newsreels of the planet's destruction and salvage. With this 2020 release, The End is New, Lorenz’s grand vision for the song overrides the how of it.

"The things I value are under attack," Lorenz writes. "And writing songs and making art are the methods I have for responding. I have tried to use my observations and reflections of the world bent through my fun-house-mirror mind to show what I see; a planet stressed. ... We can do better."

“Most of the time making records for a living is both fun and edifying,” says Berlin “But every once and a while I get rewarded with a simply superlative experience, and making The End Is New was certainly one of those.” He adds, “We had a blast building these ideas into songs, and Matt’s endless inventiveness made each workday a genuine pleasure. His talent is a unique gift.”

"I told Steve I wanted to make a doom-folk record," says Lorenz. "That’s what I’d started calling my music when people asked. He was game. Neither of us knew quite what that meant at the time, but I think we found out with The End is New. There’s a heavy mix of hope and desperation in the sound and lyrically I was trying to be a mirror to society using truth, myth, confessions and stories."

In the strangest of ironies, the production of this album, an artist moving from solitude to collaboration, went forward in a time when Lorenz, Berlin, all their studio musicians, and the entire world were in isolation for the lockdown of pandemic.

“We had done some tracking in February and felt that we had a good start," says Lorenz, "but things had gotten a bit strange. Steve Berlin, producer extraordinaire, was stuck at home on the West Coast under a newly imposed lockdown and here in Massachusetts the virus was starting to heat up. The bicoastal, remotely produced recording process was bizarre and frustrating but fruitful. We plugged along, track by track, occasionally commenting on how crazy everything was feeling. Justin, the sound engineer and co-owner of Sonelab, and I had spent time together in the same studio so we figured if one of us had The Virus we probably both did so why not finish the record as safely as we could? So we watched as the world drastically changed around our little musical haven, unsure of what lay ahead. We polished off the record bit by bit in the following months, recording overdubs from home with no more studio time to be had. J Mascis made a ripping appearance on ‘Light a Candle’ and Steve Berlin slipped off his producer shoes and laid down some horn parts. I’m so very excited to share these new songs. I think the writing on this album is some of the best I’ve ever done and the production has them sounding huge and cinematic."

The End is New is an artist expanding his possibilities, collaborating, matching his lyrical power over eleven tracks with the epic sounds and narratives of his imagination. “Black Holes and Overdoses” riffs off the unrelenting news cycle, the numbness that wants for oblivion. “And Then There Was Fire” finds Lorenz reflecting on current events, inspired by the destructive wildfire in Australia, which seems like three years ago at this point, but took place right at the end of last year and beginning of this year. “Light a Candle” is the simmering doom of lost love. “Can’t Look Away” protests the overuse of a planet. “Jesus! King of the Dinosaurs” is a romp poking fun at extremists and biblical timelines.

Growing up in Cavendish, Vermont, Matt Lorenz began playing piano at age five, and later took up violin, saxophone, and guitar. During his years at Hampshire College in Amherst, Massachusetts, he studied music and adaptive instrument design, a pursuit that included building a prototype for a drummer who couldn’t use their legs, where they’d be able to play the bass drum and hi-hat through a system of pulleys. After college, he headed to Europe on a $150 plane ticket, ran out of money in Barcelona, and spent a year playing music in the streets. “That’s where I learned how to sing loud, which got me figuring out what my voice could do,” Lorenz notes. Once he’d returned to Amherst, he formed the band Rusty Belle with his sister Kate and, several years later, started The Suitcase Junket with the aid of a guitar he’d found in a dumpster. ‘The Suitcase Junket’ is a nod to Lorenz’s longtime love of collecting old suitcases, including an antique that he’s refurbished into a bass drum, and to a secondary definition of junket, i.e. “a pleasure excursion."

The End is New is Lorenz's sixth full-length album as The Suitcase Junket, his first for Renew Records/BMG. The sound has become more refined and deeper with each release. Lorenz tours extensively and plans to be back on the road for a waylaid release tour for The End is New in 2021. Lorenz is also a visual artist. In the early years he designed all The Suitcase Junket album art and merchandise and made the music videos generated with his songs. He continues to create the visuals for merchandise, and to produce some of his videos, now with collaborators. He gets very excited about coffee, gardening, bees, dogs, birds, mushrooms, tinctures, making his own wine and maple sugaring season.