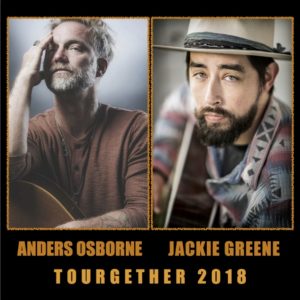 Anders Osborne and Jackie Greene’s “Tourgether” is coming to Spring Strawberry! Both are incredibly talented singer-songwriters and Tourgether is a beautifully stripped down acoustic showcase of both artist’s material, each taking a turn with one of their songs while the other provides accompaniment.  Anders Osborne is one of New Orleans’s true music treasures, having earned numerous awards and honors as a masterful guitarist and deeply emotive song crafter.  The potency of his lyrical expression, intensely soulful vocals and expert guitar work, make Osborne one of the most original and visionary musicians writing and performing today.  Jackie Greene has been chasing his musical muse ever since his teenage years, when he released his critically acclaimed independent debut, signed his first record deal and began a lifetime of touring that would see him supporting the likes of BB King, Mark Knopfler, Susan Tedeschi, and Taj Mahal.  He first performed at Spring Strawberry in 2003 and then again at the Fall Festival in 2004.  Many Strawberrians have surely been anticipating his return ever since, so it’s certainly very wonderful to have Jackie Greene return with Anders Osborne, who was absolutely killer at last year’s Spring festival!  We can’t wait to see them, and you, in just a few months!