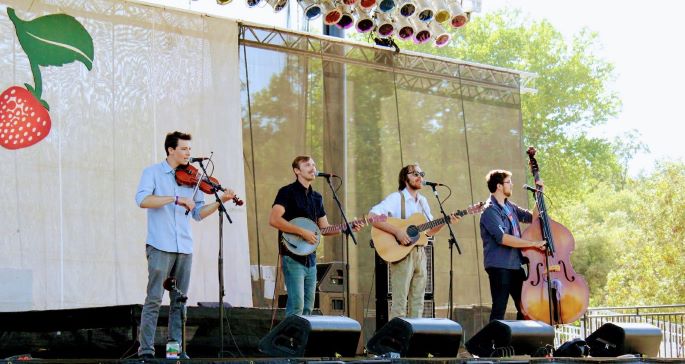 "The Brothers Strong are known for high level musical authenticity. Like the wood, water, and stone of the Sierra Nevada Mountains from which they hail, their sound is sculpted by a timeless aggregate of people and place. This four-piece string band is on a resonant exploration of the human condition with the singular mission to make music that acts a conduit for genuine connectivity. The resulting collection of original material has taken shape in rowdy and resilient tales of love and loss, intermingled with passionately precise instrumental interludes.
~Strawberry Music Festival

The Brothers Strong are a 4 piece string band from mountains of the Sierra Nevada. The band has grown a loyal fanbase by bringing an authentic mountain sound to their recordings and live sets that is hard to come by. It is this honest and genuine tone that brings people to their rough a rowdy bluegrass shows where they share their truest thoughts and feelings with their listeners. This come first and foremost through thoughtful songwriting. It explores many of the daily struggles of human life from love and loss, to success and failure, while always coming from, and returning to the heaviest most personal emotions we carry. Monterey County Weekly described the experience as: “In the spirit of The Avett Brothers’ shout-till-you’re-bleeding-from-the-mouth-country-grunge, The Brothers Strong bring their own version of alt-newgrass, straight out Sonora, California”. This is not to downplay the bands musicianship--they have been described as "hot shot" pickers and players--but rather to indicate that though lightning fast picking and fiery fiddle licks can wow a crowd, the real purpose of the instrument is to connect with the audience and let them lose themselves for a second in the emotions of the music. As described by The Alternate Root Magazine their "Bright acoustics and note-perfect harmonies give the" The Brothers Strong's music "a huge presence" on the stage allowing them to connect seamlessly with audiences in a meaningful way. These key elements define The Brothers Strong, bringing diverse audiences to their shows.